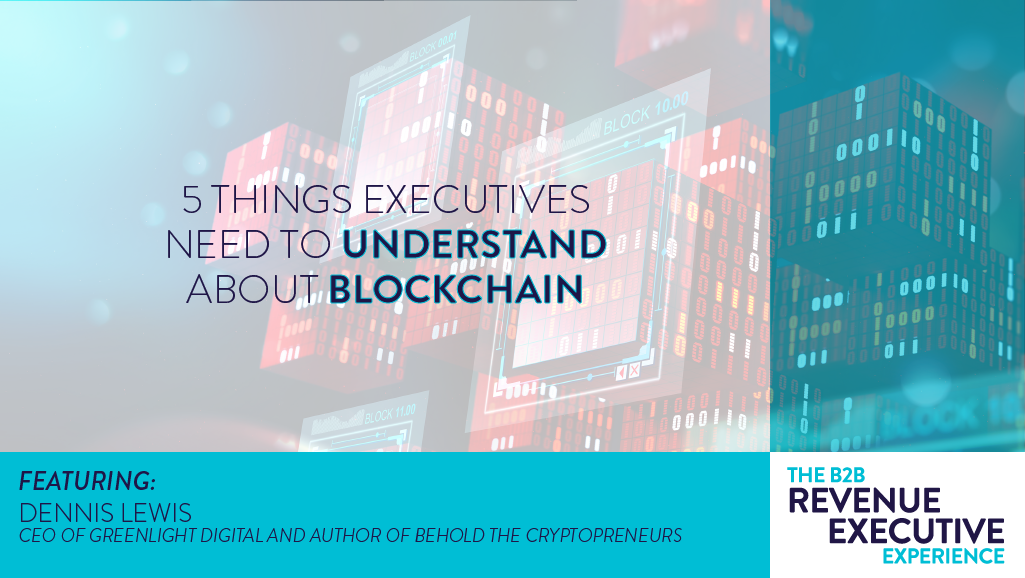 Many executives saw the rise of blockchain and cryptocurrencies as just a craze. Whatever it was, it was going to pass.

In reality, more and more CEOs have been looking into how they can use blockchain to raise capital. Yet, the cryptocurrency landscape is still considerably volatile.

On the most recent episode of the B2B Revenue Executive Experience, I talk with the CEO of Greenlight Digital and author of Behold the Cryptopreneurs, Dennis Lewis.

Dennis fills us in on five points CEOs need to understand about blockchain.

1. A blockchain is an accounting system

Dennis describes a blockchain as a system of recording data. However, blockchain is different from traditional data recording systems in one major way: It’s decentralized.

This fact, in Dennis’ opinion, makes blockchain incredibly more powerful than traditional accounting systems. Because there’s no central server that controls the database, blockchain has proven to be enormously resilient.

Although blockchain is more resource-intensive than traditional accounting systems (because its database is spread out amongst computers all over the world), it delivers multiple benefits:

“A blockchain isn’t anything more than an accounting system.”

2. All money is Monopoly money

If you’ve heard anything about blockchain in the past several years, you probably heard it in relation to cryptocurrency.

For those who aren’t familiar, cryptocurrency is internet-based money that uses blockchain technology in order to leverage the benefits of a blockchain (decentralization, transparency, security, traceability, etc.).

There are literally thousands of different types of cryptocurrency coins. Why has this seemingly imaginary money made such an impact in the business world?

The answer is simple: All money is imaginary.

Dennis points out that when someone uses a U.S. dollar to pay for something, both parties have bought into the idea that the little green piece of paper holds a certain value. There’s no intrinsic value. Money is only a myth that humans have developed to make trading goods easier.

In the early days of humanity, people bartered for goods they needed to survive. But, as the human population continued to grow, and more complex economies formed, it became much more burdensome to determine the number of watermelons a pair of shoes was worth. And then, how did that compare to the labor the man last week used to pay for his shoes?

As long as people continue to exchange cryptocurrencies, their value will be maintained.

“All money is Monopoly money. There’s no difference.”

Another advantage of leveraging blockchain is that it gives entrepreneurs a different fundraising avenue.

There’s no denying that the VC community is male-dominated. Along with that, it’s challenging for new founders to break into the scene if they don’t happen to know the right people.

Via an ICO (Initial Coin Offering) or an STO (Security Token Offering), entrepreneurs can exchange cryptocurrencies for capital to fund projects. Essentially, it’s crowdfunding. This process is a unique way to get a project off the ground if a traditional VC route is not an option.

In fact, Dennis informs us that in 2017, blockchain fundraising worldwide raised more funds than venture capital.

An ICO or STO makes raising funds more accessible for people who don’t have the necessary “ins” to the VC community.

4. There are entrepreneurial challenges

While it’s revolutionary that CEOs can raise capital through cryptocurrency, there are some monumental hurdles that come with the territory. Namely, entrepreneurial challenges.

Through his experience in helping blockchain startups market their products, Dennis has seen many a founder lacking actual business skills. Oftentimes, these “cryptopreneurs” don’t have the know-how to manage a team, money, or build a structure for a business to survive the long-haul.

It’s paramount that entrepreneurs understand there’s more to a business than just the product. Dennis points out that the blockchain industry is lacking in companies that are making real solutions to real problems. Businesses that don’t have the skills to market their stories — or even identify their stories — have saturated the industry.

This poses a serious problem for crypto investors. If the company you purchased cryptocurrency from isn’t producing actual value, your coins aren’t going to carry much weight in the marketplace.

It’s for this reason that the blockchain industry needs experienced CEOs to participate. The more business-savvy individuals who get involved, the less volatile the cryptocurrency landscape will become.

“Cryptocurrency is still a mystery to a lot of people.”

5. Blockchain is about the outcome

With anything you invest it, you want to know that there’s a company working hard to increase the perceived value of your investment. Investing in a blockchain company employs the same philosophy.

Just as a venture capitalist looks at all facets of the business before investing, you too should be aware of more than the ROI a company is promising.

Ask questions such as:

Any blockchain business you invest in should be focused on delivering an outcome and solving a real problem.

Although blockchain has become more mainstream, its use in the cryptocurrency space still has significant mystery surrounding it.

By educating yourself on the fundamentals of blockchain and cryptocurrency, you’re opening new doors to investment opportunities and growing your wealth.